Want to Innovate? Be a Fleet, Not a Ship 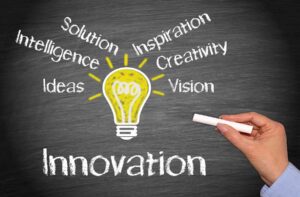 Why do large companies find it so difficult to innovate? After all, they presumably became large companies by being innovative. Whether they created a new product, found a new market, or simply developed a way to deliver products more profitably, large companies ostensibly got large by being better than the competition. So why do they struggle to innovate once they’ve reached the height of their power?

The expression “big ships turn slowly” comes to mind. Status quo bias is difficult to overcome, especially in large firms, which have established philosophies and ways of doing business. Potential innovators are frequently siloed from one another, making it difficult for them to collaborate. In addition, performance metrics often favor business as usual.

Why take a risk and fail to meet your targets when you know you can achieve them by playing it safe? By siloing teams and incentivizing the status quo, large firms give potential innovators rather small rudders with which to turn the ship.

She did this by creating small (three person maximum), multidisciplinary solver teams to focus on customer problems. By designing and incentivizing teams to “fall in love with problems, not solutions,” the teams were able to experiment, kill ineffective ideas quickly, and move on.

At the same time, Fish equipped managers with the skills to coach innovation and effectively evaluate experimentation over traditional KPIs. As experimentation increased across P&G’s business units, it further de-risked experimentation and allowed more teams to try new things.

To return to the nautical metaphor, Fish equipped teams to take smaller boats and sail away from the main ship for a while. When they returned from the voyage, their safe return and lessons learned were considered a success, even if the lesson learned was just “there is nothing for the fleet in that direction.”

Molson recently demonstrated how businesses can adopt this approach at scale. The Molson innovation team’s mandate was to “pursue new growth opportunities that are well beyond the scope of [current] businesses” but still within their “right to win.”

After exploring several options, the team landed on cannabis beverages. Since market data did not already exist for this product and the regulatory landscape of cannabis was changing, Molson’s leadership inherently had to step back and allow the team to experiment across a variety of product lines and geographies. They allowed the innovation team to separate from the main ship, chart their own course, and sail into the unknown, trusting that when they returned their discoveries would be valuable. While the financial investment ($65M) that Molson made in the innovation team was larger than most, the freedom to explore (and to fail) allowed the team to develop several products which launched in Canada two years later.

Perhaps c-suite professionals should change their metaphors. Instead of one giant ship, large companies should think of themselves as a fleet of small ships. The fleet carries just as much people and cargo, but it does so more nimbly and with less risk. If an opportunity arises, a ship can leave the fleet to explore, and then rejoin it again later. By breaking down silos, empowering team members to make decisions, and altering managerial styles, P&G and Molson adopted a fleet-style approach to innovation and were rewarded for it.